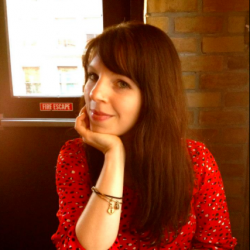 A bad break up and a stressful PhD program first drove Raechel to yoga, but quickly Raechel started to feel the connection between her work on the mat and her work outside the studio. She noticed that yoga made her a more pleasant person to be around, a more effective researcher and educator, and a more dedicated social justice activist. With the realization that yoga could have a such positive impact on herself and the world, Raechel completed Power Yoga Teacher Training in the summer of 2012, and began teaching at Corepower Yoga (Minneapolis) in December 2012. Soon after, Raechel implemented a yoga program for incarcerated youth at the Hennepin County Jail, where she taught for a year before moving to Boston. Raechel has been working as a volunteer for Hands to Heart Center since February 2016, and is deeply inspired by the mission and work of Susan and the other volunteers.

Raechel is also a professor of Women’s & Gender Studies at Merrimack College, a vegan, and a dedicated cat mom. She resides in Somerville.