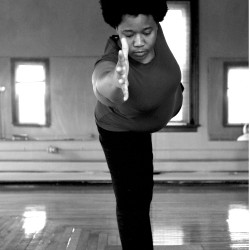 Theresa began practicing yoga in 2006 when she decided to join the Peace Corps. She was not in great shape, so she joined a gym figuring that Peace Corps Volunteers probably needed to be fit to climb volcanoes and paddle canoes in the Amazon to get to their mud huts. At the gym and unhappy on the elliptical machine: Theresa wandered into a yoga class, and fell in love. She continued to practice in her new home in Ecuador (in an apartment in the urban city of Guayaquil …since not all Peace Corps Volunteers live in the jungle), and continued when she returned to the States and eventually moved to the Boston area. Theresa found her “yoga home” at Open Doors in Roslindale when she timidly went into her first heated class and found a level of strength, sweat and release that she had never before known. Theresa believes in a practice that is as intense as it is relaxing, where you learn to appreciate and understand your body and your breath for exactly what it is today. While she enjoys teaching in a studio setting, her true passions lie with brining yoga to communities that would not otherwise have access to it. Theresa truly believes that yoga can teach you to use the power and good energy that your body creates to transform your own life and the lives around you.

Theresa completed her 200-Hour Yoga Teacher Training with Open Doors Yoga Studios in 2014, under the guidance of yoga teachers Karen Donahue, Richard Lanza, and Shawn Cornelison. Theresa is a CYT-200 (Certified Yoga Teacher) by Open Doors Yoga, a Yoga Alliance accredited program. Theresa will begin a trauma informed yoga training with Sue Jones’s YogaHOPE, called TIMBo (Trauma Informed Mind Body) in September, 2014. Upon the anticipated completion of this program in early 2015, Theresa will be a Certified TIMBo Facilitator, and will be eligible for TIMBo Licensure with YogaHOPE.

Theresa calls her teachings LEGITyoga (Learn. Emote. Grow. Ignite. Transform).
In classes with Theresa, students learn that a strong yoga practice exists both on and off the mat. Theresa teaches yoga in a way that is focused on the wellness of the individual in an entire sense: especially with regard to how an individual’s ability to control their breath and movement will lead to an increased ability to control of their own mind, body, and behavior.